The review on this website is a brief overview and summary of the objective performance of this speaker. It is not intended to be a deep dive. Moreso, this is information for those who prefer “just the facts” and prefer to have the data without the filler. Discussion about the data and my subjective thoughts can be found in my video below.


For a primer on what the data means, please watch my series of videos where I provide in-depth discussion and examples of how to read the graphics presented hereon.


The recently released Pioneer DJ VM-50 is a powered 2-way Studio Monitor featuring a 5.25-inch midwoofer and a 1-inch dome tweeter in a waveguide. The baffle is made of 4mm thick aluminum which (truly) helps to mitigate baffle resonance; something that was an unfortunate nagging problem in the JBL LSR305P mkII I tested last month. The internal amplifier is a 2-channel Class-D amplifier and each channel supplies 30w to the mid and tweeter, respectively.

This is what the manufacturer says:

The active VM-50 produces clear audio with fast-attacking, punchy bass. The speaker can be tuned to suit the characteristics of any room, making it perfect for recreating a club sound when you’re DJing or providing a flat frequency response when you’re producing music in a home or professional studio setting.

MSRP for the single speaker is approximately $169 USD and $340 USD for a pair.

The back features a variety of switches for boundary settings and basic level adjustments to tailor the sound to the user’s tastes or needs. There is a volume knob and (3) input options: XLR, TRS and RCA phono. 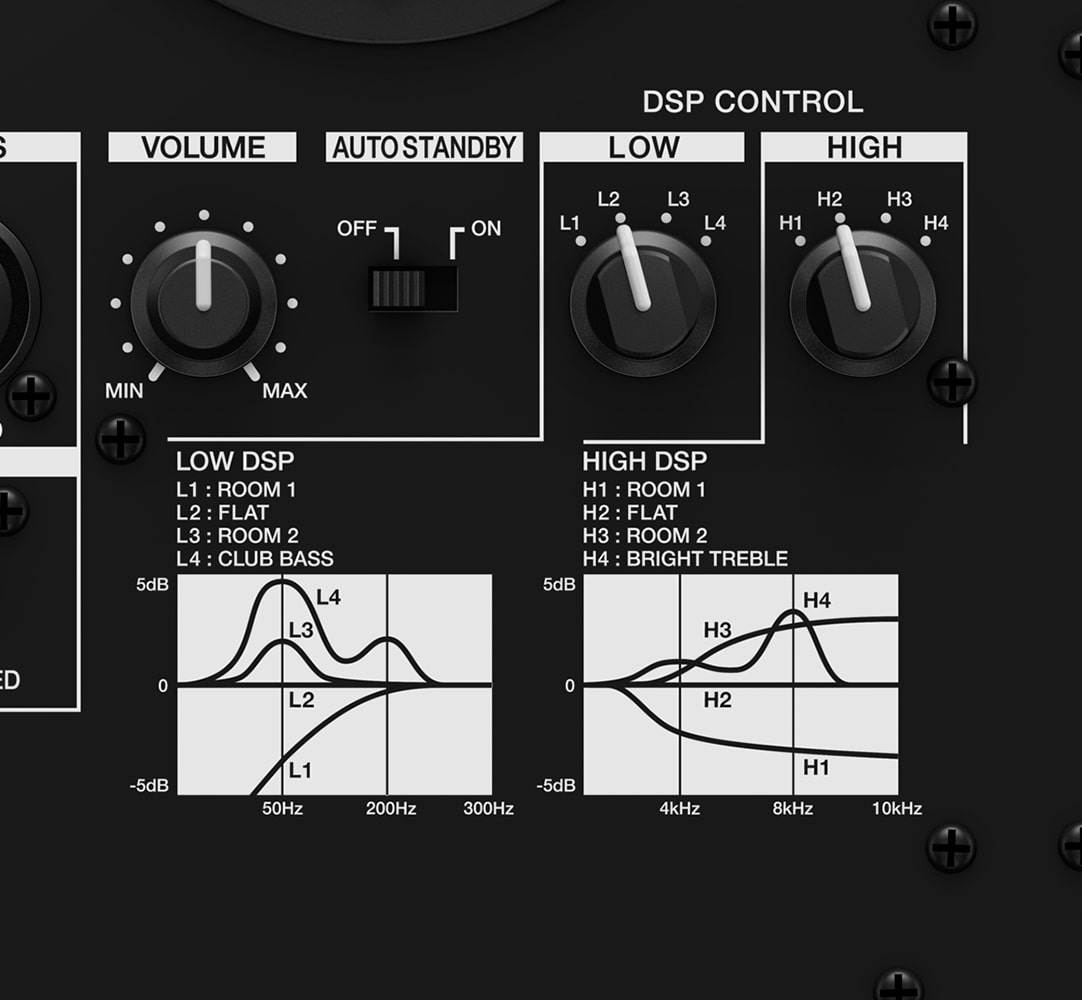 
A picture of the setup in my garage:

While the manual doesn’t say, explicitly, where to position the speaker relative to the ear, there is a graphic that shows the listening plane between the midwoofer and the tweeter/waveguide. I tested this speaker on that plane first and realized it was not ideal. Therefore, the reference plane in this test is at the tweeter (I do provide the results of the other in the extras section). Volume set to max with XLR input. The dip switches were all set to ‘L2’ and ‘H2’ for the “flat” (free field) setting.

Note: The roll off rate of this speaker is sharp and therefore some noise was unavoidable at 25Hz - even with 4x averaging - which causes a spike in the response here. Ignore the response below 30Hz.

These plots are generated from exporting the Klippel data to text files. I then process that data with my own MATLAB script to provide what you see. These are not part of any software packages and are unique to my tests.


Horizontal Polar (Globe) Plot:
This represents the sound field at 2 meters - above 200Hz - per the legend in the upper left.

Based on my results above, it is obvious the output is limited (via internal DSP) somewhere above the 96dB @ 1m output level.

The below graphics indicate how much SPL is lost or gained in the long-term as a speaker plays at the same output level for 2 minutes, in intervals. Each graphic represents a different SPL: 86dB and 96dB both at 1 meter.

The purpose of this test is to illustrate how much (if at all) the output changes as a speaker’s components temperature increases (i.e., voice coils, crossover components).

The red and blue lines represent changes in the output compared to the initial “cold” test.

When looking at the SPIN data and the horizontal data, you can see some resonances around 600Hz, 800Hz and 1200Hz. I thought it was possible the port was resonating and sending energy around the speaker through a mechanical means. So, I tested this theory by measuring the speaker with the port open and then stuffing the port. Per the graphic below, there is no difference in the region I am concerned with. This means the port itself is not the cause.

The width of the speaker is about 7.8-inches, but assuming 0.50-inch thick walls, this puts the internal width closer to 6.8-inches. This results in a half-wave of about 1kHz. Figuring the internal dimensions may be a bit off, this leads me to believe what I am seeing is a standing wave inside the enclosure that is simply leaking out of the enclosure in the back. The same assumption applies to all three resonances as the internal dimensions work out to be approximately at these frequencies.

All of that said, these resonances aren’t anything I was actually hearing, at least not to the detriment of my enjoyment of the speaker. Certainly not like other speakers I have experienced resonances with, where in those cases, completely ruined my enjoyment of the speaker. More than anything, it is the sequence of resonances that cause the midrange from 500Hz to 1kHz to be boosted and alter the tonality. In my case, I simply used the built-in EQ of my computer to pad this down about 2dB and it made my musical selection more pleasant to listen to.


Ears at the Tweeter Level

As I mentioned earlier, I initially trusted the manufacturer’s picture which illustrates the listening axis between the midwoofer and tweeter waveguide. Well, as you can see below, that’s not the case. So, keep your ears at tweeter level.

If you want to see the music I use for evaluating speakers subjectively, see my Spotify playlist.

I do want to mention this, though: Pioneer states these have “flat frequency response". We know that’s a farce.

This is a case where the data does tell an accurate story and we can see that this is definitely not “flat”. It would be easy to dismiss the speaker. Though, when you consider the price and how they are most likely to be used, these speakers are actually pretty good. These aren’t a “home theater” speaker and I can’t imagine anyone would use them in that fashion. Most will use these as computer speakers or with a mixing board. Both of which will almost undoubtedly provide the user with some EQ. Objectively, the 500-1000Hz region’s bumped up output is problematic but it doesn’t ruin the experience. Though, to some degree, the sound does suffer from this. However, if you have the means to add some EQ (I did with Apple Music’s little 1-octave EQ) then you can really transform these speakers into a great budget monitor. I did this and I enjoyed the speaker more as it seems to get rid of both a “forward” sound and “thick” upper vocal. I would personally take them over the JBL 305Pmk2 because of the front baffle resonance issues I had with the JBL.

My recommendation? Buy these, toss a couple bands of EQ from 500-1kHz to bring this down via your music app or mixing board. Try some adjustments in the high frequency region to see what works best for you. And then call it a day.

If you like what you see here and want to help me keep it going, please consider donating via the PayPal Contribute button located below. Donations help me pay for new items to test, hardware, miscellaneous items and costs of the site’s server space and bandwidth. All of which I otherwise pay out of pocket. So, if you can help chip in a few bucks, know that it is very much appreciated.

Alternatively, if you’d like to purchase these speakers, please consider using my B&H Pro Audio affiliate link below. It yields me a small commission at no additional cost to you and allows me to keep providing you with some cool data to make educated purchase decisions!