I took a hiatus from testing for a couple years and therefore my test setup has changed. Please see the below sections to learn more about how my tests were conducted if this is of importance to you.


In both cases, the following tests were/are conducted in the same manner:

All Frequency Response (FR) results are given at 2.83v/1m. This is to give you a baseline to compare other tests with so you can have a good idea of the measured sensitivity.

Note: Frequency Response is also known as “Linear Distortion” because it does not change with output level (if you discount compression effects).

Harmonic Distortion (HD) and Intermodulated Distortion (IMD) results are derived (in most cases unless otherwise noted) via a “nearfield” measurement; where the microphone is placed near the cone of the drive unit/speaker. This testing is performed at a level that will equate to various output levels in the “farfield”. Typically, I perform at least one nearfield measurement that will have an equivalent 96dB output at 1 meter away. For example, an HD test may show a y-scale value of 112dB due to the nearfield microphone placement but extracting that to the “farfield” value of 1 meter away, the output level would be 96dB. I also try to provide different output level equivalents to give an idea of how the distortion profile changes as the output level increases (i.e., 90dB @ 1 meter, 96dB @ 1 meter and 102dB @ 1 meter equivalents). This is especially important because most listening distances are further than 1 meter and therefore require more volume to reach the same SPL as a closer distance. Every doubling of distance results in a 6dB drop in output. An example: 96dB at 1 meter is equivalent to only 90dB at 2 meters.

Note: Harmonic Distortion, Intermodulated Distortion, and other typical “distortion” nomenclature are also known as “Non-Linear Distortion” because it changes with output level (and therefore why I perform multiple tests at varying output levels).

These reviews were done with a couple different setups.

Before about 2015 I was using Klippel measurement gear. Post-2015 I switched to a simpler setup using the Dayton OmniMic and Dayton DATS because I didn’t have the time to do the full scale analysis with the Klippel product any longer.

All my testing is done in my garage. It is not an ideal environment but I have taken steps to ensure the data is as accurate as it can be. This means spot treating the room with acoustic panels, and testing when the temperatures are approximately equivalent to ensure accuracy and consistency within my own data set.

The test baffle I use was initially a scaled IEC baffle. However, once I used that for some time I realized that it was terribly impractical at over 8 feet tall and nearly 6 feet wide. It literally consumed my bonus room. After a period of using this baffle I decided to go with something more space friendly and ultimately scaled down the original baffle to a size of 1256mm wide, 1508mm tall. I added large caster wheels, providing me the ability to roll the setup in and out of place as > needed. The drawback, like any other measurement baffle, is a baffle influence in the measurement. Since all testing has this same baffle influence the results within my data are comparable. For the added benefit of full disclosure, I have simulated the baffle size/shape in Tolvan’s EDGE software and provided farfield and nearfield response simulations due to the baffle itself and included them below. 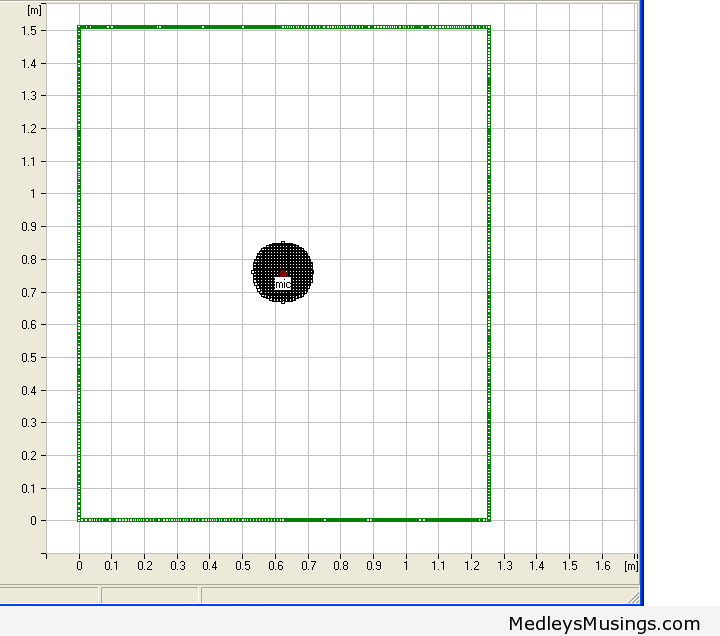 My frequency response testing is done in a manner that merges nearfield and farfield response at a frequency that will mitigate the wild lower frequency shifts you see above. When performing off-axis measurements, the baffle also has an influence as well, dependent upon mic proximity relative to the baffle. This is not simulated but you should have enough data above to do this if you desire to see those results.